Just a few years ago, offering Internet-based fax services required a major capital investment exceeding several millions of dollars for national coverage. But no longer. Suddenly, offering Internet-based fax services is now the easiest and most-affordable path for the VoIP service provider, and even the ISP to follow, to add new revenue, profit, and positive cash. All-software (HMP) fax media servers, such as Commetrex’ BladeWare™, and the new breed of IP-network wholesale carriers, such as Global Crossing and iBasis, drop the bottom out of capital requirements, reducing them, by millions of dollars, to under $25,000 for typical configurations.

The critical technology breakthrough that enabled this economic discontinuity is Commetrex’ first-of-a-kind media server that can directly terminate IP-based real-time T.38 and G.711 pass-through faxes. Without the ability to directly terminate IP faxes, the i-fax service provider was forced to invest in POP-specific TDM fax servers, and backhaul the resulting fax file to the provider’s server farm, where e-mail notifications were sent to subscribers. Using this legacy technology, a POP per tier-1 and tier-2 MSA implies a multi-million infrastructure investment for North American coverage, a formidable barrier to market entry.

But more than a T.38-capable fax media server was required. T.38-capable media gateways are also required to enter and exit the IP network. Although not as large an investment as the TDM-fax-server infrastructure, this is still a significant financial hurdle unless the provider can leverage a previous investment of an IP carrier, such as Global Crossing or iBasis, which have made the investment in a T.38-capable infrastructure, and, under certain circumstances, will write a T.38 service agreement.

Often, the cost of using such a network is far less than the operating cost of a proprietary network infrastructure. This means the investment and value contribution of the service provider is the all-software-based fax termination server, marketing, and the OSS/BSS aspects of the business. 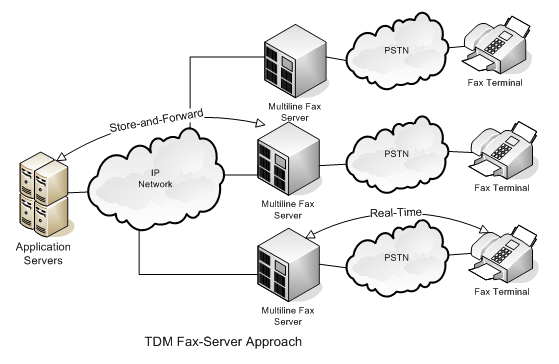 How Does It Work?

First, let’s look at the pre-BladeWare approach, illustrated above. The economics have changed over time, but, in general, the service provider reduces long-distance fees (inter-LATA tolls) by strategically locating multiline fax servers in large MSAs. Typically, this would mean a rack full of servers, each with multiline fax boards. For large providers, these servers can run to several-hundred lines. At $300 per line, that would be well over $100,000 for the initial investment. Then, there’s the cost of renting space and maintaining the system, often running to $60,000 per year in a secure co-lo facility.

The fax servers are connected, usually via an IP connection, with the service provider’s application servers, which can be anywhere. A subscriber’s fax-image file to be sent is routed to the POP that will result in the lowest per-call fee to the provider. For inbound faxes, the dialed number indicates which subscriber should receive the fax, which is received by the fax server and sent to the application server. 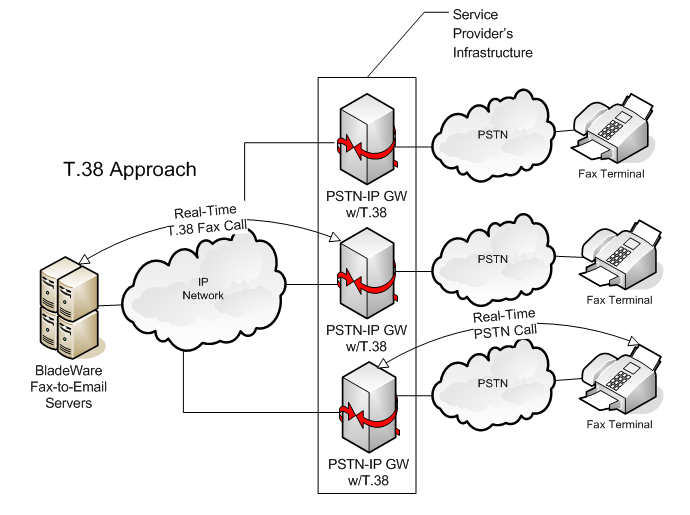 But by installing BladeWare on the servers and engaging an IP service provider that supports T.38, the distributed multiline fax servers are no longer needed since the fax calls flow from the fax terminals, through the local calling area and the IP partner’s gateways all the way to the BladeWare servers, where the real-time T.38 call is terminated (or originated). This means millions in infrastructure becomes a few tens of thousands in servers and software at the corporate center, where every fax call is controlled and updates installed directly on the provider’s server farm.

The BladeWare Fax-to-Email Server and its relationship to other network elements is shown below. 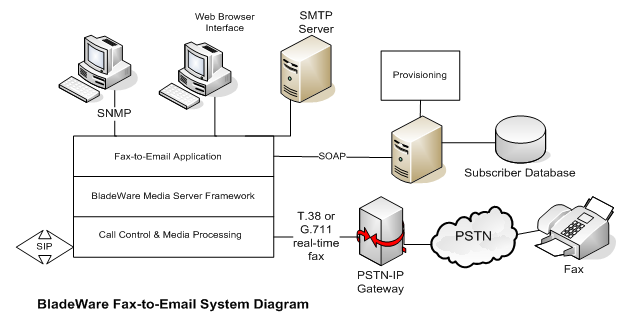 Here, you can see that BladeWare Fax-to-Email is a comprehensive ready-to-deploy application. Call control is provided by SIP. The network delivers faxes via T.38 or G.711 pass-through sessions. G.711 pass-through is the technique that older gateways and less-capable networks use to try to transport faxes over IP networks. It works as long as no packets are dropped, packet delays don’t exceed the depth of the jitter buffer, and the PCM clocks on each end are synchronized (or the faxes are short). This would be the case over a LAN or a very high-performance well-managed private network. As T.38 eliminates these problems and consumes fewer resources, you should use a carrier that supports T.38.

The application is managed via a browser-based control panel. Performance and maintenance information are provided by the SNMP module and interface. SOAP or other access methods are used to interface with the subscriber database. The CDR database is not shown, but included. The service provider provides provisioning.

As the source code of the BladeWare Fax-to-Email application is included in its SDK and the system is highly modular, as shown below, modifying the database interface or the format of the CDR is very straightforward, if required. 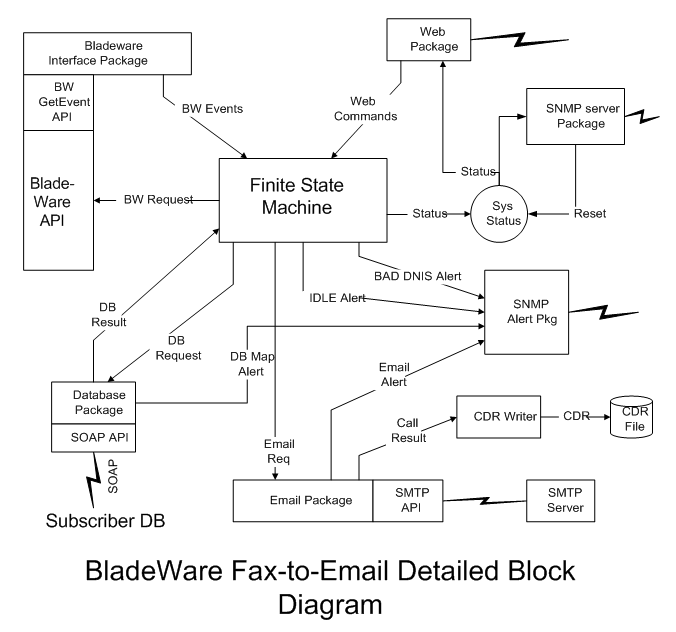 So what do the carriers want? Well, the ones we’ve spoken with want lots of minutes. It’s the old saw about “profitable customers”, meaning a significant commitment. The IP connection can be billed per megabyte. They like to talk about a gigabit Ethernet or a DS-3. Then, there might be $20.00 per month per block of 100 DIDs, and $11 per month for each simultaneous call path. And you’re looking at per-minute fees for PSTN calls of nominally $0.01 per minute.

Depending on where you are, SIP trunking may be an option. SIP trunking is a service increasingly offered by competitive carriers where the customer’s system, such as BladeWare, is directly connected to the provider’s IP network. The provider handles connecting with the rest of the world, including the PSTN. A typical package might be $900 per month for a dual bonded T-1 connection, 16 simultaneous calls, and 3,000 minutes per month. Additional minutes may be offered for as little as $0.03 per minute. A two-year contract is typical.

The IP-fax-media-server-IP-carrier paradigm dramatically lowers the financial hurdles that must be cleared before an IP-based fax-service project is funded, clearing the way for the smaller provider to enter the business. And larger providers can now offer more boutique services.

Acronyms Used In This Article

There are two primary ways that fax transactions are conveyed across packet networks, such as IP. The T.37 standard specifies how a fax image is encapsulated in e-mail and transported, ultimately, to the recipient using a store-and-forward process through intermediary entities. T.38, however, defines a protocol that supports the use of the T.30 protocol in both the sender and recipient terminals. (See diagram below.) T.38 supports transmission of a fax across an IP network in real time, just as the original G3 fax standards did for the traditional (time-division multiplexed (TDM)) network, also called the public switched telephone network or PSTN.

A special protocol is needed for real-time fax over IP since existing fax terminals only support PSTN connections, where the information flow was generally smooth and uninterrupted, as opposed to the jittery arrival of IP packets. The trick was to come up with a protocol that makes the IP network “invisible ” to the endpoint fax terminals, which would mean the user of a so-called legacy fax terminal need not know that the fax call was traversing an IP network.

The network interconnections supported by T.38 are shown below. The two fax terminals on either side of the figure communicate using the T.30 protocol, the fax-to-fax protocol released by the ITU in 1980. Interconnection of the PSTN with the IP packet network requires a “gateway” between the PSTN and IP networks. PSTN-IP gateways support TDM voice on the PSTN side and VoIP and FoIP on the packet side. 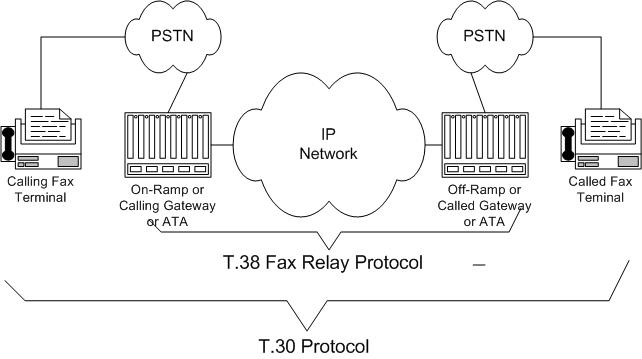 For voice sessions, the gateway will take in voice packets on the IP side, accumulate a few packets to insure a smooth flow of TDM data upon their release, and then meter them out over TDM where they eventually are heard by a human or stored on a computer for later playback. The gateway employs packet-management techniques to enhance the quality of the speech in the presence of network errors by taking advantage of the natural ability of a listener to not really hear the occasional missing or repeated packet.

But facsimile data are transmitted via modems, which aren’t as forgiving as the human ear is for speech. Missing packets will often cause a fax session to fail at worse or create one or more image lines in error at best. So the job of T.38 is to “fool” the terminal into “thinking” that it’s “talking” directly with another T.30 terminal. It will also correct for network delays with so-called spoofing techniques, and missing or delayed packets with fax-aware buffer-management techniques. Differences in the clock rate of the data on each end are overcome, and the required IP data rate is reduced by a factor of 10 to one.

BladeWare integrates the functions inside the box on the right side of the diagram. T.30 from the fax terminal and T.38 from the gateway are integrated into one function, which Commetrex calls TerminatingT38. The analog modems aren’t needed since there is no TDM connection, so there is no need for analog modems. This means that T.38 calls originating from the gateway on the left will be terminated inside the IP network by the TerminatingT38 stack on the right, which happens to be inside the BladeWare server. Calls are managed by SIP.