What Happens in Vegas Won’t stay in Vegas 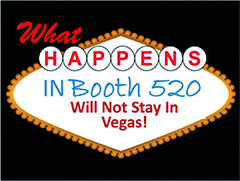 Yes, we’ll be at ITEXPO 2014 Vegas on August 13 and 14, but this is the first time we’ve exhibited as NetGen Communications. Actually, we are co-exhibiting (booth 520) with NetGen’s Shanghai partner, New Rock Technologies to signal the deepening partnership between the two companies.

The partnership’s development and marketing of Smart ATA® has been a big success, so we have decided to take advantage of the relationship by NetGen bringing more of New Rock’s proven enterprise gateways, PBXs, phones, and SBCs to the North American market, with the first stop being the MX series of access gateways to complement Smart ATA. But if you’ve not heard about Smart ATA, this may not mean much to you.

Have you heard of Commetrex’ sister company, NetGen Communications, which produces and markets Smart ATA, the full-function voice-fax ATA that removes the two most-vexing FoIP problems from the ITSP’s trouble tickets? It’s true; you no longer have to be afraid of FoIP. Gone are the days of having to tell your subscribers “Keep your POTS for fax,” because Smart ATA is built with NetGen’s patent-pending Smart FoIP®. And you might not know is that Smart ATA is jointly developed and produced by NetGen and New Rock Technologies.

Until today, Smart ATA and Smart ACS comprised NetGen’s product line, but now that is changing. The partners are introducinga suite of products to the North American market that deliver the enhanced performance, features, and value that established New Rock as one of the foremost vendors of enterprise IP-telephony across Southeast Asia. The newest addition to NetGen’s portfolio includes the MX gateway series, which duplicates the features of Smart ATA, but at a much larger scale.

The MX series extends from the MX8 to the MX120 access gateways, as well as the MX100E trunking gateway, which supports up to four E1/T1s. The MX provides NetGen’s channel partners with the solution to virtually any enterprise application problem with its ability to support nearly any configuration of station or office interfaces, up to the maximum capacity of the chassis. For example, the MX60 goes from 16 FXS to 24 FXS and 24 FXOs, in just about any combination.

If you are on the NetGen Channel mail list, two weeks ago you read articles on how NetGen’s expanded product line allows its channel to address telecom’s “long tail,” you learned about the REST API, and details of the MX series…pretty good stuff. So, if you’d like to get on NetGen’s e-mail list, fill in the on-line form or shoot an email to marketing@netgencommunications.com. And come see us next week in Vegas.

Back in 2002 when BladeWare was the first HMP fax-server released, there were few multi-core processors. Single-core 1-GHz processors were the norm. So we sized BladeWare to handle 256 channels, which was large for a fax server. Fast forward to 2014 and we have 3-plus-Gig processors with sky’s-the-limit number of cores. For example, the Xeon Phi has up to 61 cores. Time to make a change to BladeWare, don’t you think?

A few months back we added a feature to BladeWare whereby the number of HMP media-processing environments spun up at boot time could be specified via configuration or left to the system to decide. It works great with Linux and Windows with effective channel allocation across the cores. But the internal data structures are still sized for 256 simultaneous sessions. We’ll do something about that by the end of the year, probably making the maximum configurable by the user.

Looking for a high-capacity telephony server? You don’t need DSPs to get you there. All you need is to drop an email to sales@commetrex.com.

With HMP fax servers such as BladeWare delivering hundreds of ports per PC, it makes no sense to pay for expensive DSP-based fax boards. So we’ve stolen a march on the industry by adding support for the Sangoma line of telephony-interface boards to BladeWare, which had previously supported SIP. Now, BladeWare has a full line of very low-cost, high-density 2-U PCI and PCI Express boards:

The MSP FX S/O is expandable from 2-24 ports in increments of 2 ports in just one PCI or PCIe slot.

Rendezvous in Vegas or New Orleans?

Commetrex and our sister company, NetGen Communications, will be exhibiting at ITEXPO Vegas in August. We’ve moved up to a bigger booth and will be sharing the space with New Rock Technologies, NetGen’s partner out of Shanghai, China. Please plan to stop by booth 520 and learn more about Smart ATA, NetGen’s soon-to-be-announced wireless IP PBX, and other solutions we offer to make FoIP work for you.

Not going to the show in Vegas? You’ll have another chance to catch us at Cloud Partners in New Orleans in August. This is will be our first time exhibiting at this show, but we’re extending our market reach and are very excited about the new opportunity.

We hope to see you at one of these events. In the meantime, drop us an email.