Whenever I hear someone tell me that T.38 isn’t capable of bringing reliable real-time fax to IP-carrier networks, I resist the temptation to roll my eyes. Instead, with missionary zeal, I explain that if T.38 provides reliable fax in enterprise IP networks, and, if real-time fax is problematic in carrier networks, it’s not because there is a problem with T.38, there’s a problem with the way it’s being used … possibly abused. You might argue that it doesn’t matter why, either it does the job or it doesn’t. Good point. Read on. 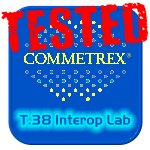 I sometimes relate that once, when we operated the very popular T.38 Interop Lab (2002-2004), we sent an error-free 1,000-page fax over the open Internet from our offices in the US to a testing partner in Australia. Open Internet! No errors! How could that be, you say. Easy, I say. T.38 works, but you need to know how to use it. Here, there was no signaling involved. It was a nailed-up connection. What about packet loss? We used a redundancy level of 3 for both negotiation and image. What about clock drift? 1000 pages could take 10 hours, enough time for clock drift to overrun or under run any reasonable-sized jitter buffer, but our T.38 eliminates clock drift as a problem.

Then, I explain that it’s not T.38 that’s causing the problems, it’s configuration and signaling. For example, in an effort to save on bandwidth, the carriers I’ve dealt with default their redundancy depth to zero—no redundancy. Most users don’t call them on this since they just don’t know about it.

Then there’s slow network signaling. Ten percent of the calls in one network we tested took over six seconds for the SIP re-Invite to T.38 to arrive, averaging over 8 seconds. For many of those calls, that’s plenty of time for the G.711 pass-through session to pass the point of no return, so the call will fail if the G.711 stream suddenly vanishes.

At Commetrex, “We Make FoIP Work!” So, who better than Commetrex to work closely with several carriers to solve this problem, and make FoIP work without qualification.